Hey folks, I wanted to not only give you another update on our on-going 2009 997S PDK car with regards to software tuning but also a small glimpse into the strangely secret, complicated and yet sometimes wonderful world of software tuning:D

The EVOMS crew has been very open, helpful and willing to work together on software creation. We’ve successfully been using and installing the entire range of EVOMSit software for some time now here and been eager to help with the 2009 DFI program. Our 09 997S has actually been running/testing the EVOMSit software on the car for a few weeks now but yesterday was the day we wanted to actually validate what we had been feeling/testing/ on the street. So armed with a pair of SDI3 (Siemens) ECUs, a PIWIS, AWD Mustang dyno, our EVOMSit Software/Hardware toolkit (came with the Tuner) we eked out a bit more power.

First and foremost here are the results: 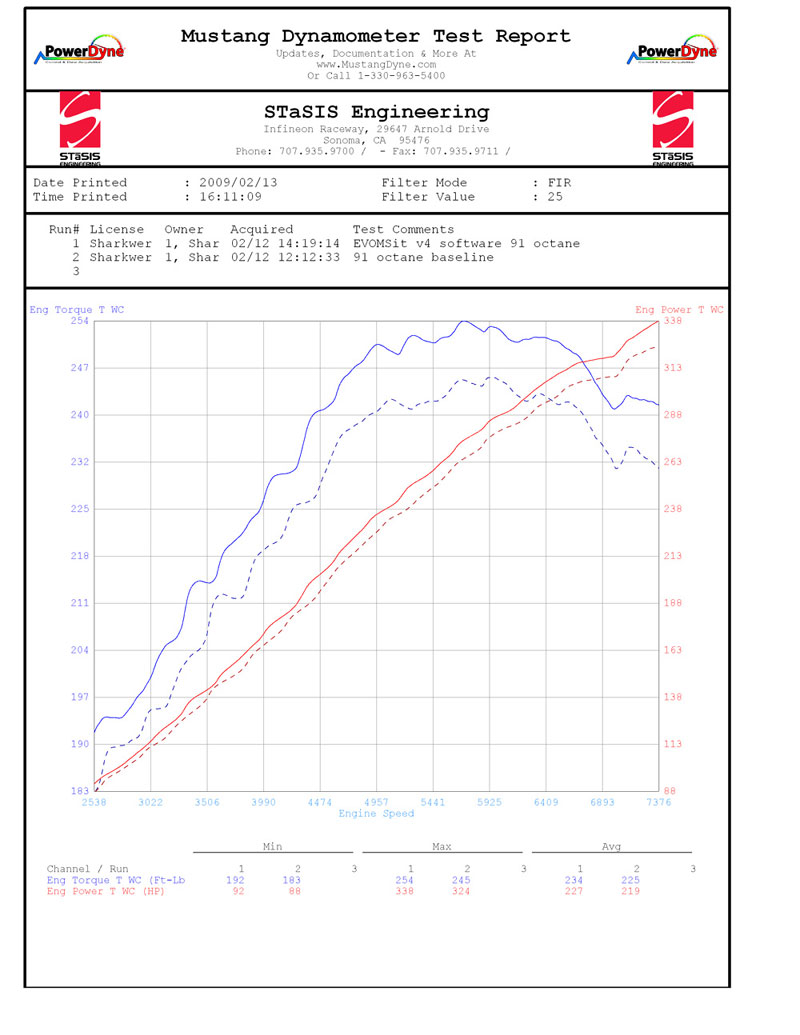 Now a little about the tools and process...
To start things off you can see that in order to be able to communicate, read, edit and upload the data on the SIEMENS SDI3 requires a lot of precise and rather nifty gear. The Bosch Motronic ECUs of old were far more cooperative that's for sure. As of now there are no tools available specific to this new ECU. EVO had to engineer and manufacture their own to "open the communication door" into this ECU. Also, this ECU does not use the same shape bosch type map structure. It uses the same map structure as the SDI4 ECU found in the Cayenne TTFSI which we have learned about a year ago through trial and error. This made us VERY familiar with the maps in the SDI3 found in the 997. Once the ECU has been what's known as "boot-strapped" (this is tricky indeed) we gain access to stock data and "read" it out as shown here. 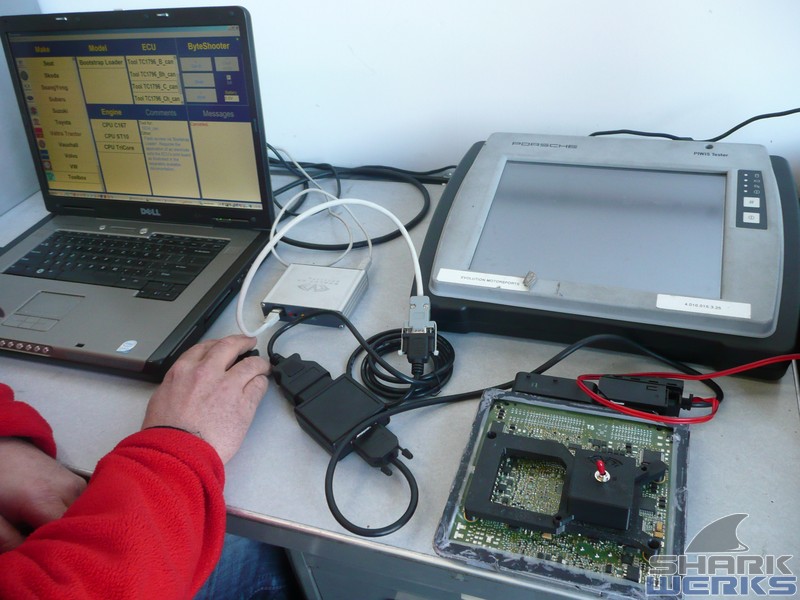 With the data read out you can see how the tuning of individual maps (and there are many) takes places (flow maps, timing, fuel etc...). The 3D mapping tweaks have to be precise and you can't just blast them with 48 degrees of timing:D 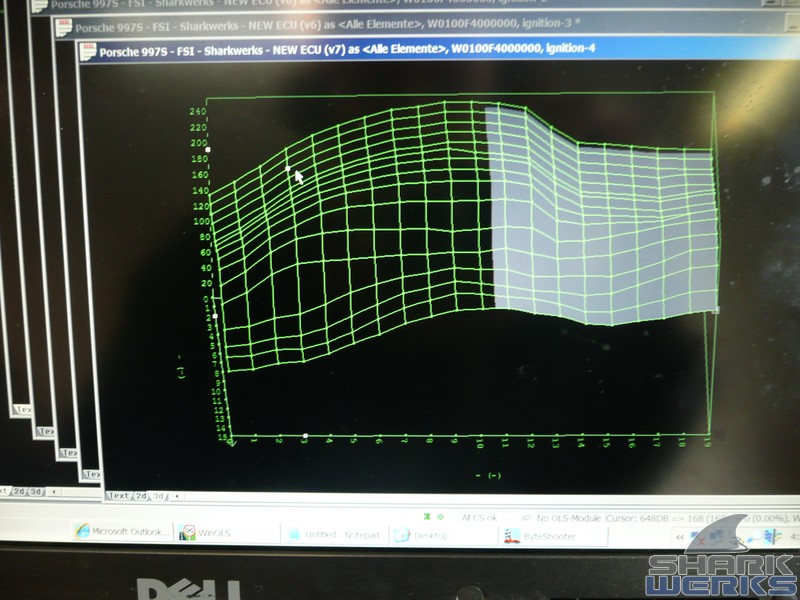 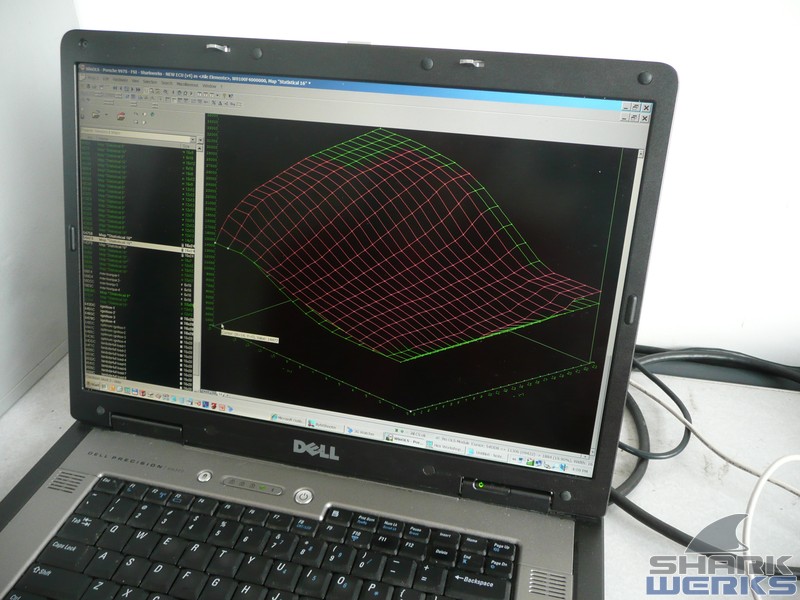 Once the EVOMSit software has been created using the same tools we are able to "upload" as shown here. The process does take a few minutes... 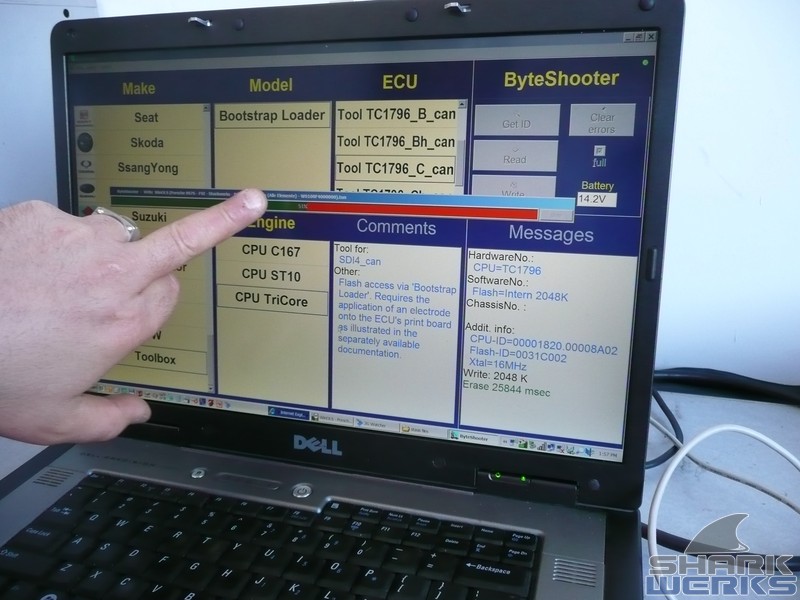 As far as running the car on the dyno goes, as an end-user you won't have access to the PIWIS Porsche Tester but it's not a requirement either should you want to dyno your own car. For 17K I'd prefer it ran Linux instead of Windows XP and that you could actually do proper data logging (unless you call sitting there recording live data with a camera data logging). 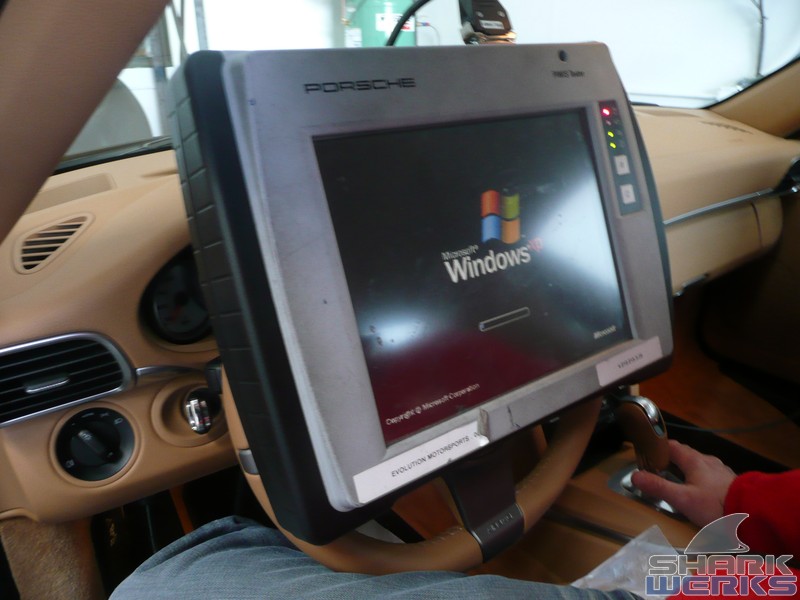 So how does one actually get meaningful dyno data?
Well, we spent the first hour getting the car to dyno with some repeatability. Typically, when testing a new car or a new file, or test a car in general, you need to make consecutive dyno pulls until the following happens:
1. The car makes 2 or 3 repeatable pulls in a row
2. When the car progressively makes more power with each consecutive run, you need to continue to dyno test until the power falls off. This indicates that the ECU is adapting and when it starts to loose power, you can compare this last pull (where the power falls off) to another sample test group conducted in the same way. On the 997 FSI injected engine with the SDI 3 ECU the ECU adapts fairly quickly however due to the complexity of the various different timing maps, it required about 10 dyno pulls after each flash for the ECU to fully adapt. Additionally, we log the timing and monitor AFR through the OBD port with the Mustang auto tap OBDII data logging software. This allowed us to overlay the various runs to see the timing and AFR changes and to gain accurate data to make the necessary tuning changes to gain the desired results. With careful testing procedures, where we are only interested in acquiring accurate testing results, we can make real adjustments that have real results. Typically if you let the car cool of and do a few key and driving cycles, the car will then repeat this power figure as in test case scenario 1 as listed above. It may take up to 10 dyno pulls to get the ECU adapted after a flash. 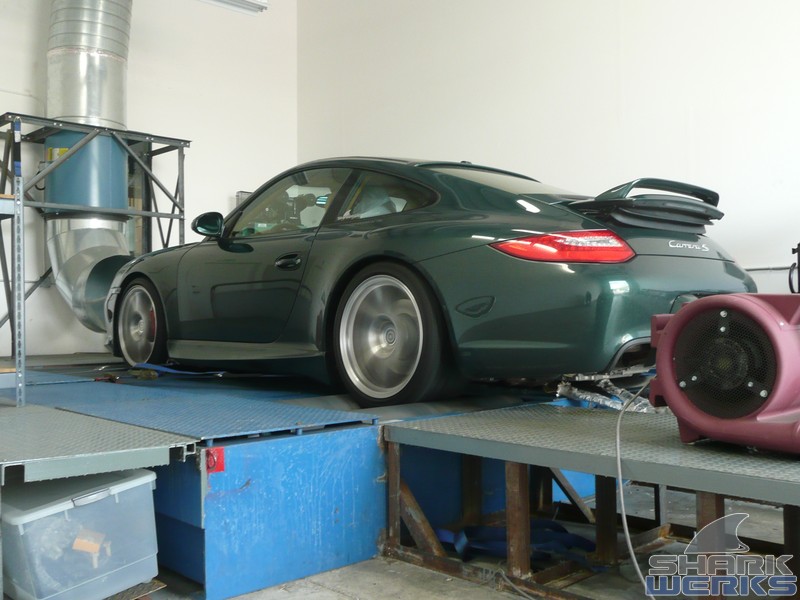 After some nine test files we are satisfied with the dyno testing results. We then integrated some advanced (SP) sport pedal and IST (integrated switching technology) settings to maximize throttle response and higher octane timing maps. After more final field tests we are now satisfied with these latest changes and are ready to offer what we feel to be an extremely robust solution for those of you with 2009 997S cars in the form of the EVOMSit. Make no mistake the process wasn't easy EVOMS has spent a lot of time creating and developing the necessary gear. With the EVOMSit software a typical 997S PDK car can expect to gain ~13HP and 12TQ on 91 octane. The nice thing was that we were able to create, test, tweak and fine tune multiple files on the car and on-site with these tools and gathered a plethora of data. The throttle response is also much-improved as far as drivability is concerned.

For those of you with questions feel free to drop me an Email to .


A few more pix that didn't make it into the final cut;) 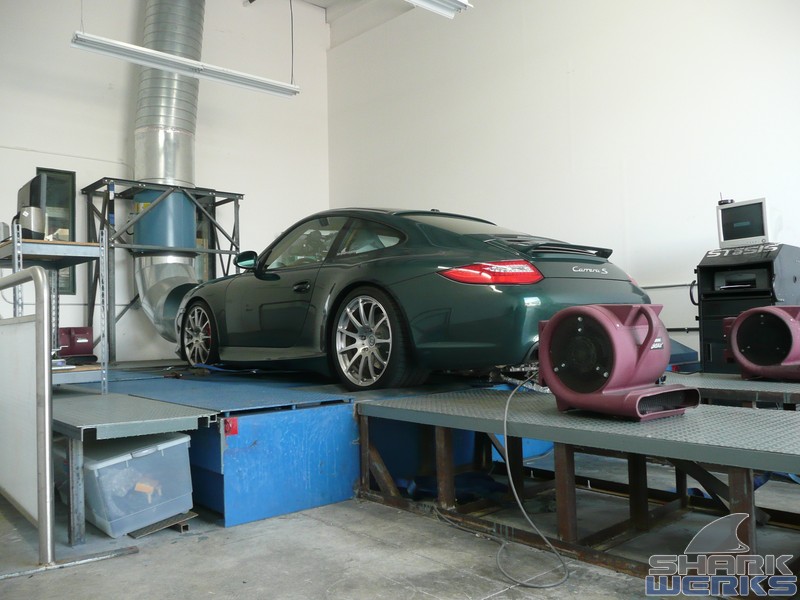 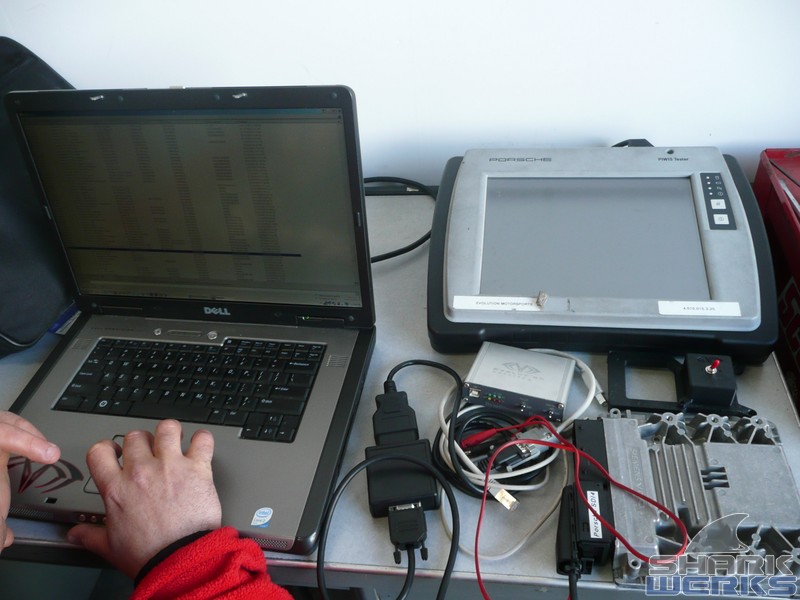 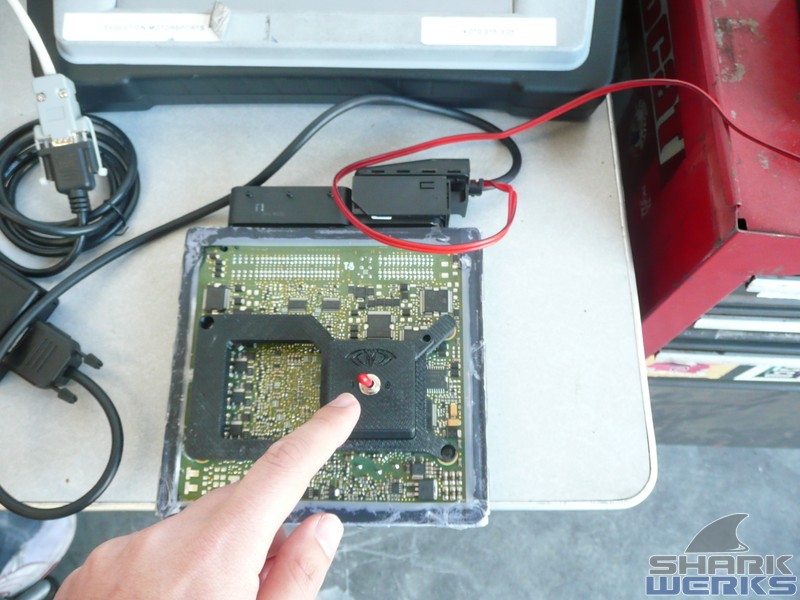 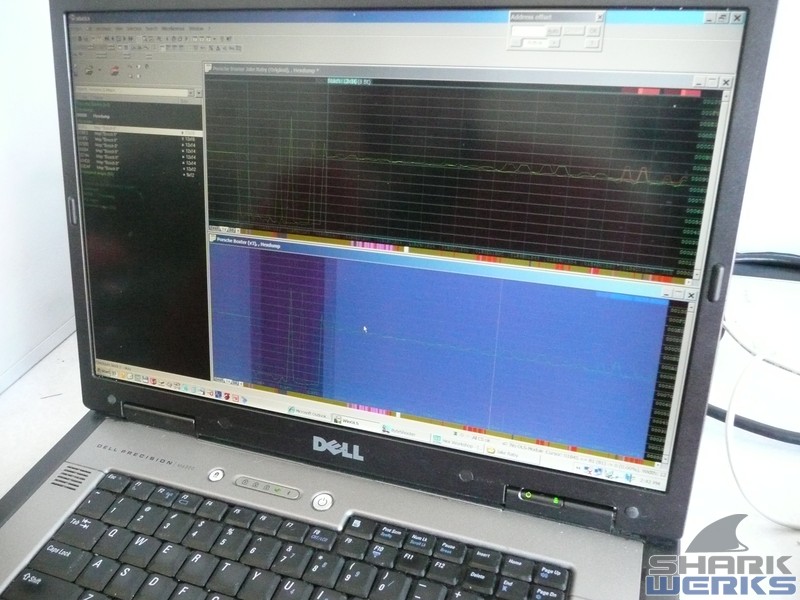 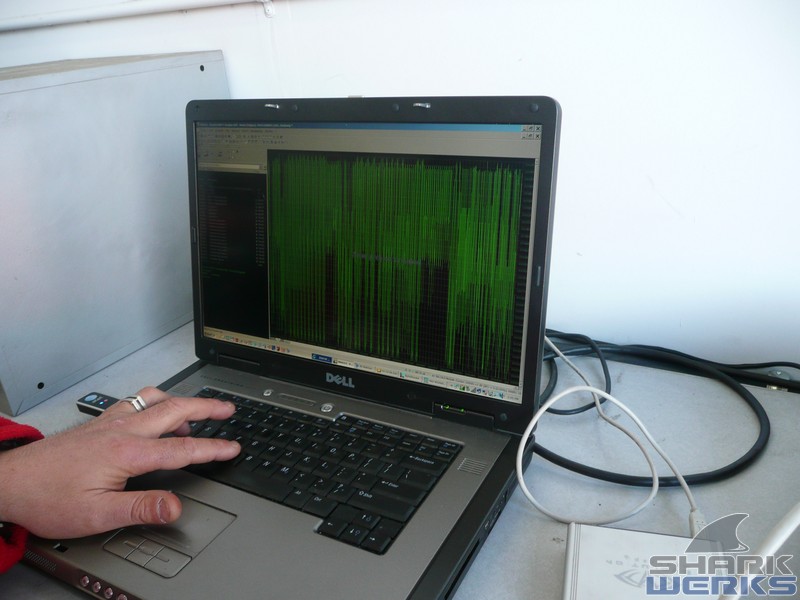 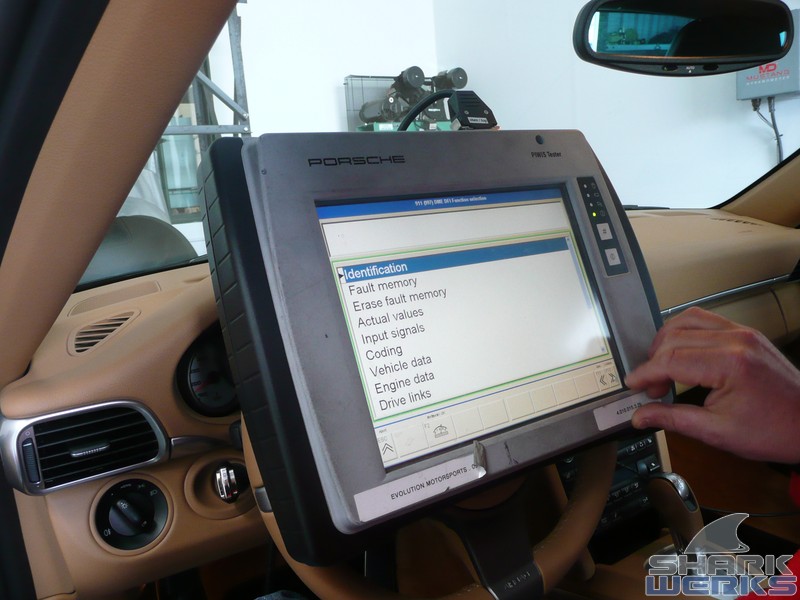