We flash many 996TTs, 997TTs, GT3s, Cayennes etc... but what's actually behind it all? Something that we do get asked a lot is what makes us decide to partner with one tuner vs another. The following example is one of many reasons. In this case, it's a naturally aspirated example but many of the same principles still apply. We also think it's something that many of you folks do not get to see so here's a "behind the scenes" look at tuning our 3.9L 996GT3.

After a few hundred miles of break-in James put the final touches on the car, we made the decision to leave to Arizona (a 12+ hour drive through Los Angeles) around 9 PM. Driving that kind of distance through the desert, in the summer, with a freshly assembled motor would normally be a little unnerving, but we knew with James' attention to detail that we were in good shape.

Todd from EVOMSit sent us a base file (since this was the first 3.9L 996 GT3 and had modified camshafts / race exhaust etc.) and we crossed our fingers as James turned the key - but the car started up beautifully and idled great.

The hours flew by (who doesn't enjoy driving a GT3?) and before we knew it, we were through LA. Nothing stopped us on our trip, but we did find things we did not like about a base tune that would require Todd's fine tuning and dyno time. Nothing beats one-on-one time with Todd for this kind of driveabilty. So en route we made mental notes - a weird low-throttle hesitation here, a flat spot in the power curve there.

In particular, the most noticeable problems with a non-custom tune were at low to mid throttle - sadly where most of a freeway drive is spent. The car would buck a bit when holding speed up hills or gently accelerating (even though it ran decent at wide open throttle). Todd said to keep track of all the imperfections so we could address them one at a time and create a tuned car that ran as good or better than stock.

And soon we were greeted by Arizona sunshine. 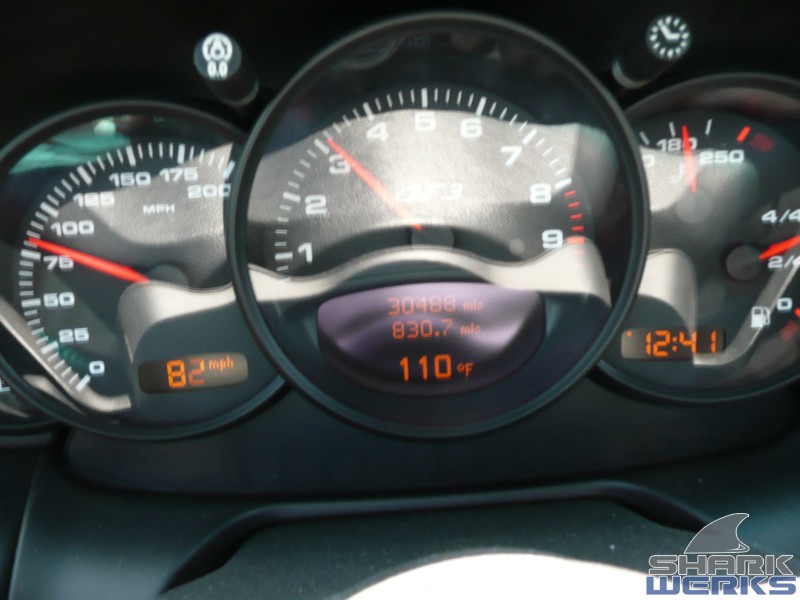 When we reached EVOMS headquarters in Scottsdale, we immediately strapped the GT3 down and got to work. 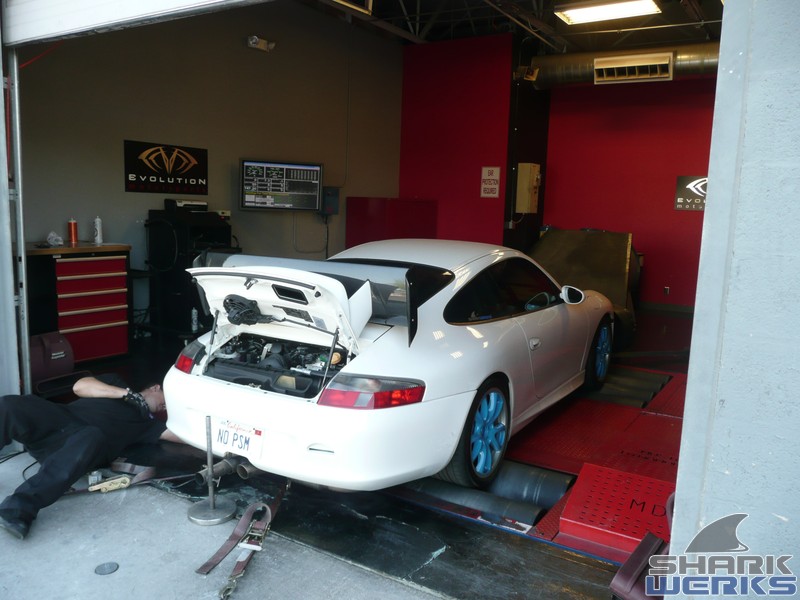 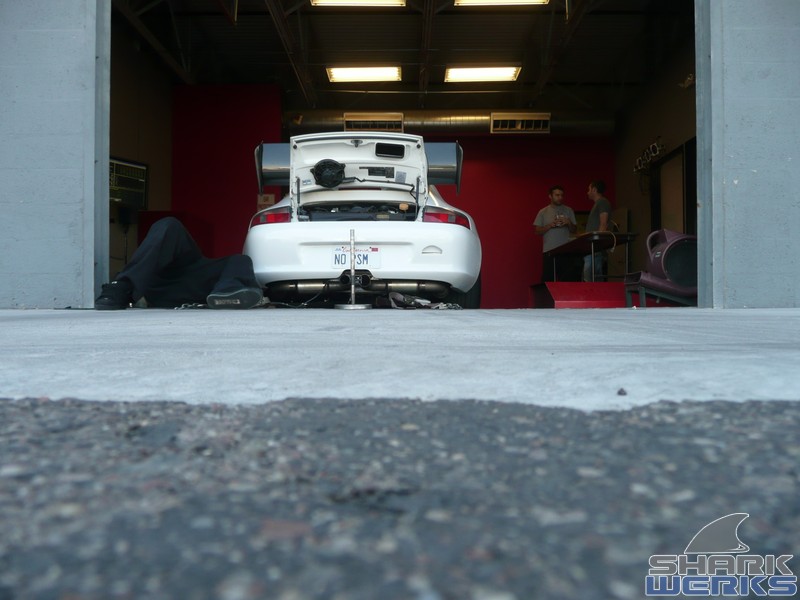 EVOMS has their tools and SharkWerks has ours: 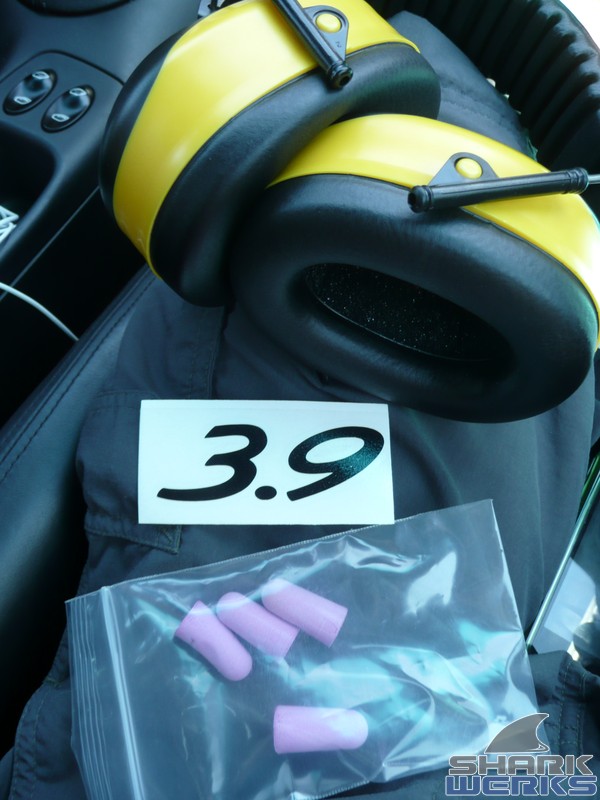 A baseline pull showed a good increase in torque over a stock 996 GT3 and plenty more topend power, but it was clear that Todd could squeeze more out of her. He set up his emulator, so that he could make realtime changes without removing the ECU from the car, and focused on one part of the power curve at a time. Todd logged the changes and constantly watched to see what was happening at different RPMs.

Todd installed two eproms into our ECU as well so that we had a true "dual-mode" if you will. One full map for 91 octane and one for 93 octane that we can switch between (more on this later): 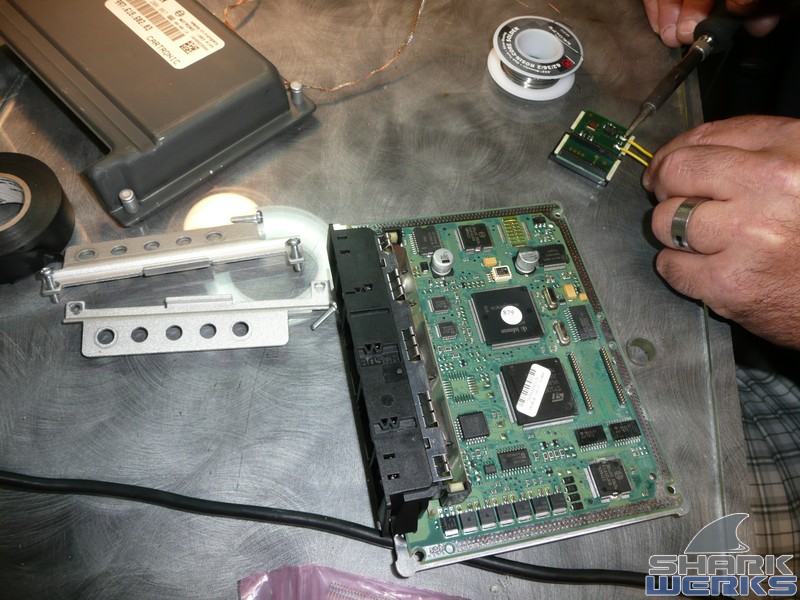 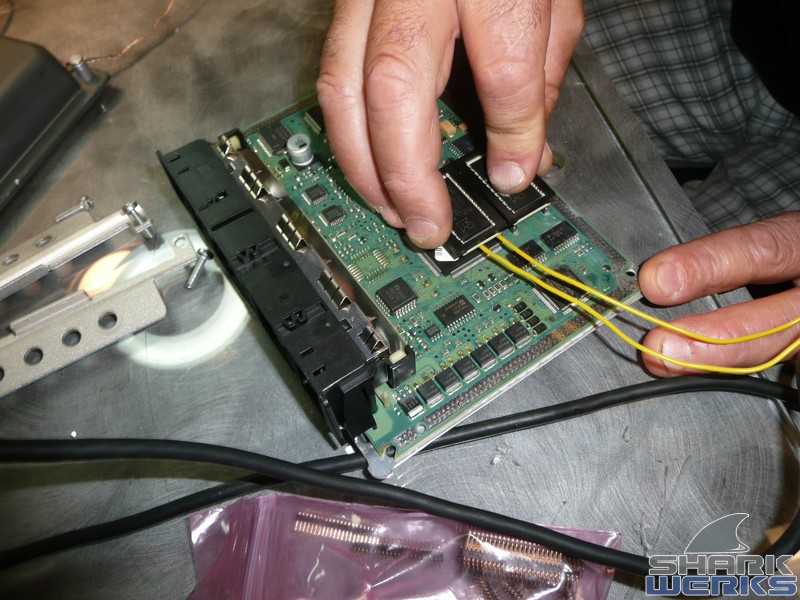 If there was a dent in the power curve (even if it also existed on a stock 996 GT3 as can be seen in the dyno baseline graph below), Todd would make a few changes and run another dyno, and again until he eliminated it. 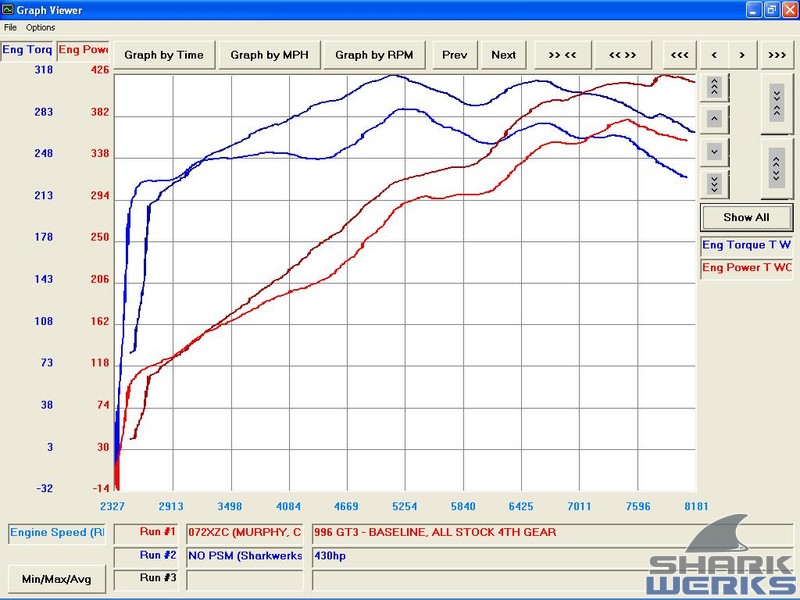 The dyno did not have a chance to rest for several days nor did James' new 3.9L motor. We must have made 200+ wide open throttle pulls throughout the week in 108F degree heat, each time to squeeze a tiny bit more of out the car or eliminate a potential safety issue. Todd would have us watch the logs while he watched the emulator, and we would tell him "Right now!" when a certain undesired event happened so he could pinpoint the cause.

This video below shows a brief look into the Matrix of Porsche tuning (take the red pill obviously). With the emulator installed on to our car's ECU we were able to make "on-the-fly" changes and perform precision tuning.

If you watch this second video below you can also see us doing a dyno run with the emulator hooked up so that we could then see the EVOMSit changes in action to verify what areas of specific maps were being used (cuts out any guesswork). There are obviously certain targets/calls that one wants to achieve but it really does take a lot of time, effort and energy but the end results were worth it.

Dan's Take 1:
"Obsessed" is the word I would use to describe Todd's commitment to creating a perfect file and I have never seen such attention to detail from a tuner before. He simply would not let us leave without a perfect running car.

A fuzzy picture showing the EVOMS lobby, where we spent next 3 days eating take-out food and dynoing the GT3: 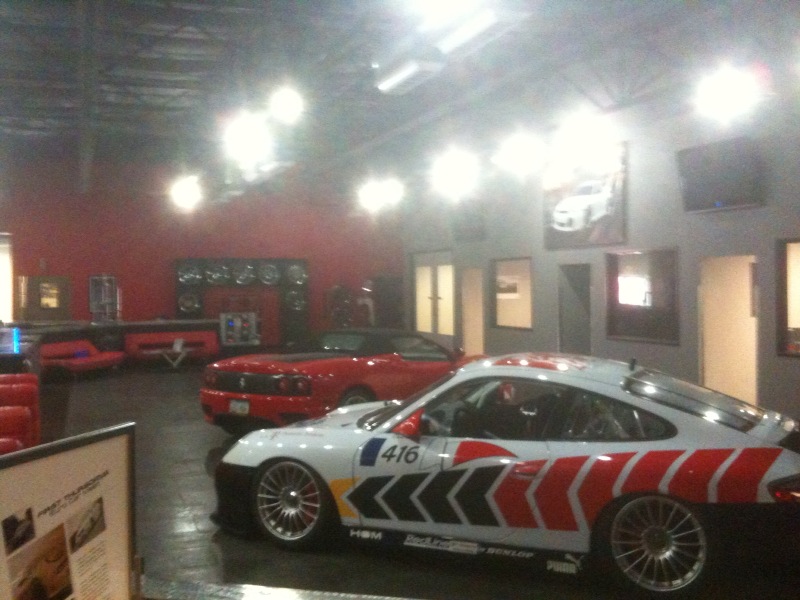 When you're tuning until the wee hours of the night you need a 24 hour place... 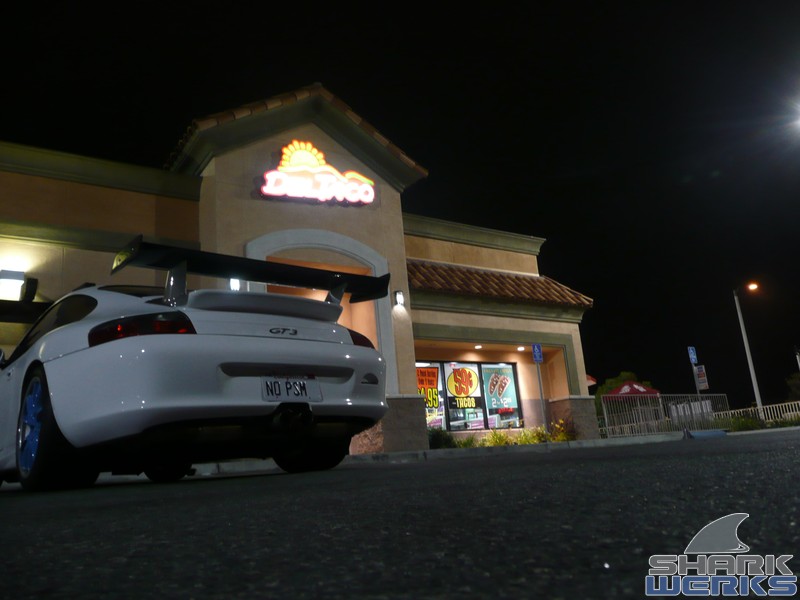 And then back on the dyno (here's a clip of how she sounds with our race/track exhaust):


Dan's Take 2:
By the end of the trip, the car had picked up an additional 25 HP from its baseline tune file, 30 ft/lb torque, and had a much smoother useable powerband. The biggest noticeable difference vs a stock 6GT3 is in the initial low-end grunt. The change in tq (look at the graphs) almost give it a V8-like response.

When we finally left the Phoenix area late Thursday night, I had the pleasure of driving the first round. As I merged onto the freeway near EVOMS, and "gently" brought the car up to cruising speed, it was obvious that Todd's ~50-hours of tuning were not at all wasted.

The GT3 was so smooth now, incredibly responsive to even the slightest throttle inputs. As smooth as stock? Smoother even perhaps. Look at the dyno and you can see how it looks at wide open throttle, but the real magic was performed in the low load and mid throttle. We were very happy indeed... 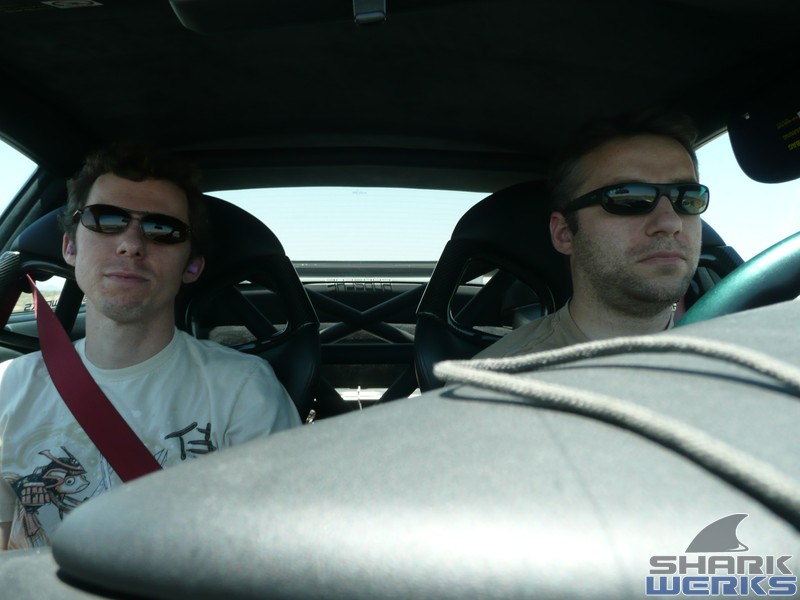 It even got slightly better mileage thanks to his light-load level adjustments. 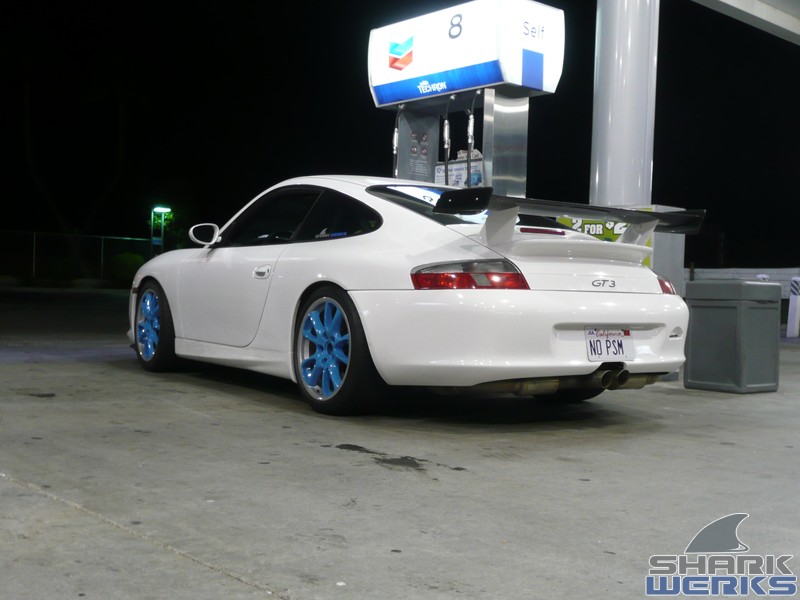 Todd wanted to create a file that is 100% ready, that anyone would be happy with both in a daily driver or a track-only race car. And after a couple trips to Arizona and back we're confident this 996 GT3 could be driven by anyone. Some 6,000 miles later she's a happy camper!